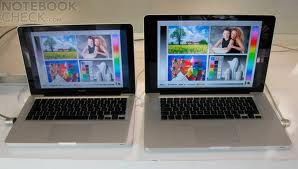 MacBook’s are a very sought after brand when it comes to laptops and computers. They tend to be very popular with the younger generation for its speedy music files and the fact that it comes with iTunes installed onto the computer or laptop already. There are many different versions of the MacBook but two of the most popular are the MacBook Air and the MacBook Pro. Some major pros that the MacBook Pro has against its competitors are that it is extremely lightweight and easy to carry around wherever you plan to go that day. It also has a very sleek and thin design so it fits into a lot of purses and briefcases without taking up too much room or being too heavy on the shoulders. Other pros include that it can easily have an upgrade in the hard drive and RAM. It’s quick and convent and doesn’t end up slowing down your hard drive after the upgrade like some other laptop brands do. It is also very fast when running certain programs such as the universal applications. Also with it’s built in iSight camera that makes video conferencing a piece of cake, the MacBook Pro is a good deal at a cheap price when looking for a versatile good quality laptop that’ll last you a long while. With all these wonderful pros, the MacBook Pro also does come with a few cons. Some of the cons include the fact that the processor cannot be upgraded. This becomes a problem when some projects have to be done with the new features that come with upgrading your software. Another major con is that the MacBook Pro doesn’t come with an internal modem. The MacBook Pro also has a very glossy screen which makes it difficult to use outdoors for the reason that the glare can become quite unbearable. Another alternative MacBook that you can choose from is the MacBook Air. The MacBook Air is quite similar to the Pro with a few stand out differences that can really alter the decision of the buyer. Some major pros for the MacBook Air include the battery life being able to last a good five hours which makes it easy to use for assignments that can take a while and not have to recharge in the middle. Additional pros include a 2 GB memory and a lightweight three pound design which makes taking it along with you wherever you go. Cons are also eminent with the MacBook air as well. Some cons can include that it’s a wireless only internet connection which can make it nearly impossible to work in non-Wi-Fi area. Also the fact that there is no Ethernet port or wired backups for the Ethernet can be a considerable con for some people. There are many different MacBook’s to choose from and each have their own individual pros and cons but you have to decide which cons are outweighed by the pros for your specific taste.